Overall Rating (based on customer reviews): 4.3 out of 5 stars 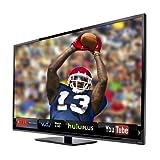 The VIZIO E701i is at the top of its class when it comes to least expensive HDTVs of comparable size, offering a wide range of high-end features. This TV has an impressive 70-inch flat panel display and its stylish black finish and thin bezel casts a premium modern look while maximizing viewing experience. The E701i TV also has an ultimate two-sided remote with one side for standard buttons and the other side that has a full QWERTY keyboard, which allows users to play games as well as surf Internet.

Its 70-inch screen has Razor LED backlit technology and offers full HD with a maximum resolution of 1080p. Unlike ordinary LEDs, the E701i offers an astounding display of 1.07 billion 10-bit colors and dynamic contrast ratio of 1,000,000:1. This LED TV incorporates a 120Hz effective refresh rate to deliver flicker free video output and 6ms of response time. Its vibrant contrast features deeper blacks and brighter whites and intense clarity in every single image.

It also eliminates the need for external speakers and includes a 2x10W pair of super speakers with SRS HD StudioSound, TruSurround and TruVolume features. It is based on the smart TV platform and supports VIZIO Internet Apps with a built-in Wi-Fi feature that allows users to stream HD media from the web. It expands your HD experience with 4 HDMI ports, 2 USB ports, VGA, Composite, Component and Ethernet ports with digital audio output. It uses the 103.22W power at peak and complies with energy star 5.3 regulations.

The VIZIO E701i smart TV is a luxury product available at a reasonable price and is the ideal choice for households looking to get the best deal on a quality HDTV with a large display. The E701i is best suited for big rooms and TV lounges.

The VIZIO E701i features a 70-inch Razor backlit LED display with full HD 1080p resolution and a 176/176 degree viewing angle. It offers a 1,000,000:1 contrast ratio and a 120Hz refresh rate. It has a built-in HD sound system, integrated Wi-Fi and above all, it comes with a user-friendly QWERTY remote.

The VIZIO E701i is a high-end TV, however its black level is not as effective compared to some competing LEDs within the same price range.

The VIZIO E701i is a less expensive HDTV as compared to same size models of competing brands and its price tag of $1999.99 makes it a great deal.

The VIZIO E701i is available at all major retail chains like Best Buy, Walmart and Target.

The VIZIO E701i HDTV has received great feedback from the public due to its affordable price amongst other 70-inch televisions as well as its unmatched viewing quality.

Here are some REAL customer reviews:

” Panasonic Plasma. I read a lot of specs and reviews and decided on this model when the price dropped for Black Friday. Since my standard for comparison was a nice 52″…Read more

“Great TV for the price”

” which I was so close to buying, I decided to go $1-200 cheaper than the cheapest Sharp model in the 70″ lineup and buy the Vizio. I’ve always wanted to try Vizio because I’ve heard a lot of good…Read more

I purchased this TV after extensive research from Costco during the Black Friday sale and was initially a little skeptical about buying a Vizio. I have always been a Panasonic fan – have 3 plasmas that have great picture and have served me well over the…Read more 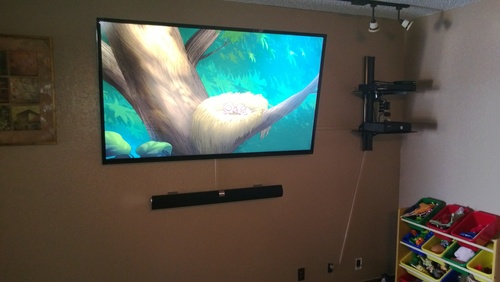 Here is more review and news about VIZIO